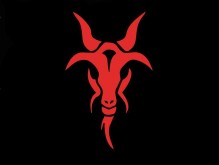 Groove Metal
Paris, France
we try to kick ass as hard as we can all the time!!!!

The band was originally formed in 2002 when long time friends, guitarist Damian Necci et bassist Franck Rehheiser, started jamming together after having both split up with their ex-bands .They then started creating their own material inspired by the riffs from the new rock trend and classic rock such as Rage Against the Machine, NoFx or Metallica.

They soon added another musician to the line-up, Ideal Dream's, Will brought his sens of melody and harmony to the band. The name Space Goats was born (referring to their mind of will and constant partying). It wasn't long after they discovered a latin influenced drummer Noé Guerra who immediately fit in.

In December of 2005 they find interest in a keyboard player, Matthieu Maignan, searching to bring more harmony to their sound.

As time went on the band grew less classic rock and became Heavier and Heavier leading to a much more Heavy Metal style such as Pantera or Lamb of God.

Pitiddu's rock/pop voice didn't match with The Space Goats' heavy new sound as they agreed to continue without him.

The current band members are as it was left and so they now continue their path by preforming from place to place in order to forge themselves a name.

The band is currently looking for a new singer in order to start touring more and aiming bigger stages to preform on.