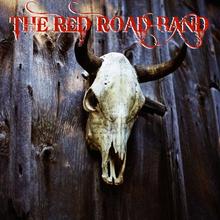 RED ROAD CROSSING is born from the meeting of 2 cultures:

The Native American one and Rock culture.

This mix of Rock and Indian way of life make

something new in the Rock history.

This band has seen the light when Thierry Sorondo

a festival of Country music in France.

They decided to compose certain songs

Thierry is musical professor and composer

for different artists in France and decided at this time

to come back to Hard Rock.

Laurent during years had been learning

He had been singer and helper for this two indian doctors.

When he met Thierry, he decided to come back

to his first love, Hard Rock.

This Album is dedicated to

all Indian Nations and First People that resist.

The songs talk about how the Native American

struggle inside this contemporary America

and about their spiritual way of life.

to keep their Dreams and the Sacred together.

May this album be a promise of changes

First song "Medicine Man" talks about Dreams and Visions that Holy men receive. These dreams push them into becoming healers. Most of the time they want to avoid or to forget this Vision. When they can’t escape any longer, they finally accept the Gift of the Creator.

It was the case for Archie Fire Lame Deer, with whom I’ve spent several years. Archie was working as stuntman in Hollywood and he got a lot of relations among actors. He did not want to quit this job that he liked so much. He did not want to come back to Rosebud Reservation in South Dakota.

But when his father was ready to travel to the Spirits World, he gave him his power. Archie accepted it, quitted his job and came back to help and heal his people, the Sioux Lakota.

This song is dedicated to all these men that never choose, but were chosen.

"Give me a chance" reflects my feelings when I arrived for the first time in the United States. I was young with no experience of this universe. I discovered powerful and proud native people who had never lost their spiritual values.

"Red Road" talks about the Native American way of life. And also about the pollution and our manner of destroying our paradise: Mother Earth.

"Sweat Lodge": This is an ancestral ritual of all Native American Nations. For my part this song is very especial. I use a sacred prayer in Lakota language and some sacred words. And the chorus says: "Living the Sweat Lodge, living down Mother Earth"...

"Riding the Buffalo": During a time in rodeos, Indians were riding Buffalos to get money. It was very deadly. But it was a quick manner to get money and white people did a lot of profit.

"Reservation land": This is my meeting with the Reservation and how Indians live there.

"F.B.I. Full Blood Indian": This song talks about a Lakota friend under the influence of alcohol. This song tells his daily fight to get free and to accept day after day his difference as a Native American.

"Badlands": Badlands are a lunar place. It’s a unique place where the atmosphere is strange and where you can really feel something supernatural.

"Sundancing in Paradise" is dedicated to the medicine man Leonard Crow Dog and to the Sioux Lakota’s most sacred ceremony, the Sundance.

Lots of Native people fear him because he represents craziness.

"Welcome in a New World" talks about rebirth. This happens when we are getting out of a Healing ceremony. Once a friend of us declared "Welcome in a new world".

"The Vision and the Dream": That’s what happens inside the Sweat Lodge when the prayer, through sacred songs, invades us. We can fly over the highest mountain.

"Spirit of the Red man" is dedicated to the whole Native American People.