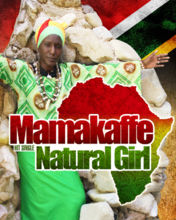 Jimmy Cliff sang in one of his hits, "you can get it if you really want" which  could be talking about Mamakaffe an Ivory Coast native who came to the shores of Jamaica in search of her dream.

In 2007 she stepped off the airplane in Montego Bay and went to see some friends in Belmont, Westmoreland and never looked back since. She however was not just on a visit but was here to sing reggae music, which she said "saved my life".

Mamakaffe or Mariam Emilie Legros was born in Abidjan in Ivory Coast as one half of twin siblings with her brother. She shared a home with her parents and more children and hers was a musical one where her household made up a group of traditional drummers.

Her parents were a modest family but she always had music. She had around ten years of schooling and as survival dictates had to do odd jobs as well as play drums for money to get by.

The next phase of her life took her to two neighboring countries Senegal and Burkina Faso where she lived and worked. One of her elder brothers found his way to France and formed a drum group called Doni Doni. Lucky for Mariam he helped her to migrate to France and she joined the group and indulged her dream of playing music for a living.

In 1996 she began the journey with the reggae music as a listerner. In 2000 her brother gave her the alias Mamakaffe because of her love for drinking coffee. She confesses that after hearing Bob Marley's song Stir It Up, her life was changed forever. She decided from then, that reggae is the music she wanted to sing.

She left the Ivory Coast just before the outbreak of the civil war but says this was hard because so many people died.Mamakaffe says reggae music has been her constant companion through her struggles.

Deciding from 2007 to make Jamaica her permanent home and also being a Rasta she settled in Papine and set to work on her career. It was hard adjusting to the culture and for her the language barrier posed a significant challenge. She credits Bongo Herman as a mentor and one who put her in touch with a lot of people. She also earned a living by traveling back and forth to Europe to perform with Doni Doni and also as a solo act.

After seven years in Jamaica things are now looking up as she have assembled a team around her  manager Roger Grant and the booking agency ZOE ZOULA in Germany  As a result through the efforts of her management team she recently signed a distribution agreement for her label Tuff Mind Tender Heart with VP subsidiary VPAL to release her first EP Natural Girl. The EP features the title track as well as Beauty  of Jah Plan featuring Hefla Nyah and two other tracks.

She also continues to build a name with many live appearances in Jamaica, Africa and Europe. Yes "you can get it if you really want". Mamakaffe is living proof of this.

- 2012: Rebel Salute as a traditional drummer