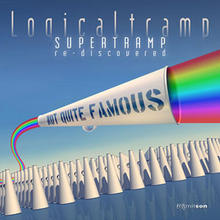 The Logical song, Dreamer, Breakfast in America, Goodbye stranger... A few amongst many of the massive hits that make up the timeless repertoire of Supertramp. You can probably whistle or sing some of these famous tunes yourself! Everybody can thanks to the millions of record sales, concert receipts and radio dominance achieved by the superb Supertramp since their inception in 1969. Their songs are worldwide rock classics and FM radio staples, that over the passing decades have remained in the hearts of millions of fans... and in the hearts of the musicians that make up the only UK tribute to the mighty Supertramp :

: the "Spirit of Supertramp"

Based in London (United Kingdom), Logicaltramp is made up of talented professional musicians with amazing credits ranging, who all share a collective love and passion for the music of Rick Davies and Roger Hodgson...

Logicaltramp bring their own unique approach to the music of Supertramp – playing full-on two-hour rock shows that includes all of Supertramp’s greatest hits, all of their stand-out epic album tracks and even a few rarities for the die-hard fan! Logicaltramp have performed many special concerts both in the UK and abroad and have received amazing reviews from Supertramp fans everywhere. The band have also garnered fantastic press reviews (e.g. Classic Rock magazine, Classic Rock Society, ...) wherever they’ve played with internationalreviewers enjoying their unique take on the classic Supertramp sound. You missed the 70/10 tour? ...Come and enjoy some more of their great music with Logicaltramp !

Last but not least, Logicaltramp have been very fortunate to receive glowing endorsments from the members of Supertramp themselves:Roger Hodgson, Carl Verheyen & John Helliwell have been amazingly supportive, John Helliwell even joined them on stage for an unforgettable performance of The Logical Song!!

Logicaltramp is so very proud to play the wonderful compositions of Rick Davies andRoger Hodgson, they very much hope you like what they do as well!....? Just keep on visiting this website for further details! They hope to see you at a concert in your home-town very soon!!

A new album has been released in 2014 - available on itunes, Amazon, etc... More details at: