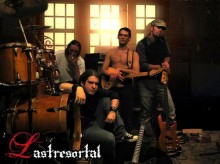 looking for a new drummer

LastResortal was born when Pearse (vocals, rhythm guitar) met Yanimal (drums) in high school. The two teenagers decided to jam together and play songs from some of their favorite bands (Nirvana, Metallica, Guns n’ Roses, Alice in Chains, to name a few).
It wasn’t long before they began to write their own songs. With a dozen of titles under their belt, the duet needed to find the right musicians to be a full band and play live. By the end of 2005, Funky (bass) joined LastResortal, and Guile (lead guitar) joined later in June 2006.
With a stable line-up, LastResortal was ready to record their songs and play gigs. In the summer of 2006, the band took a couple of days to professionally record the drum parts. The vocals and guitars were put together with a home-studio. From the dozen of songs recorded, four were selected to be sent to clubs. Soon the offers came in; LastResortal played their first gig in October 2006 in the cult venue of Le Gibus, Paris, France. Impressed by such a young, strong band, the club asked LastResortal to play again one month later.
Since then, the band has been looking for more and more gigs, anywhere and everywhere, and there’s a good chance they will play somewhere near you!!!!! Keep watching!