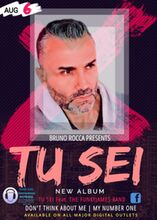 Born in Drancy in France on April 18, 1969 from Italian parents from Casalvieri in the province of Frosinone, music has always been my passion. I'm a big fan of  funky soul music from the 80', Michael Jackson, Delegation, The Whispers, Shalamar etc ... On March 6, 2019 was born my first Italian funky single "My Number One" with an electro funky sound that reminds us a bit of of the eighties with a modern and current sound. The video was shot in Lyon and was made by Amadeus and Juanito El Crotal. Then came out  on August 6, 2020 my new album to the sound Disco funk "Tu Sei"  with The FunkyJames Band. My tracks are already on air on several Italian and French radios Radio Genova, Radio Blu Italia simultaneously with Australia, and in France on Generationdiscofunk, Mixmachine, Banquise FM, Starseptradio, Radio Show in Paris and also on some radio in America and in the world. I am also preparing other new italian funky songs in the 80's style. Not to miss my musical news, follow me on my social networks.