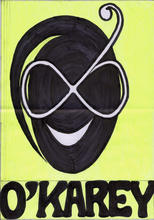 Musiciens du groupe : Afrochinese's a broadcast station that promote foreign artists in China and chinese artirst over the world.

After the buzz of his first opus "I can speak chinese", the star is coming soon with his second album"trying to be a lover" with 8 new songs full of different styles as he always do. Singing in English, French, Chinese, Spanish and Fang, O'karey is a complete artist. And to his fans, O'karey is about to release the first video clip of his single "我爱着你" according to the way he wants them to see how different that album's gonna be compared to the first one.

As we know French is a sentimental language and the star mix perfectly French and Chinese in that song plus an harmonious melody mixing western and Chinese instruments. Just awesome.