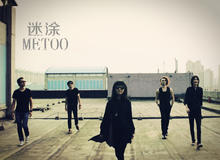 The band METOO was known as "MarsPlan", which was built in the summer of 2007 by the lead singer of it, Luzi. It is originally from the Xinjiang Uygur Autonomous Region of P.R.C. and now is drifting in Beijing. Since 2009, they officially use the name METOO. The first song of METOO,
METOO's music style is difficult to define, they are affected by too many musicians in the eastern and western music, which formed by the intersection of the vortex, however they find their only way of writing music. As long as they can, they will put it into their music, so they define their psychedelic punk. METOO's music like their human nature, both complex and simple, sometimes lucid, sometimes confused. The band has been a few years, has finished recording debut album.